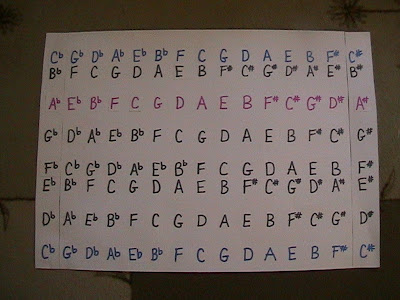 One useful feature of the circle of fifths chart is that it will help you understand key signatures.  You'll notice that as you move by columns (each column is a key or scale) progressively to the right of C major each column adds a new sharp while keeping the ones from the previous column.  As you move progressively to the left from C major, each column adds a new flat.  The video will explain this a bit more and also explain the "circle" part.
Posted by Carol at 6:26 PM